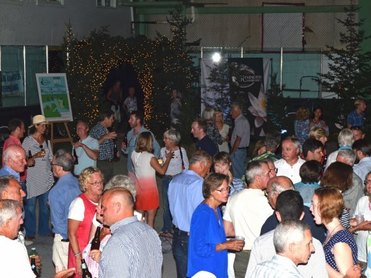 Almost 300 people enjoyed a celebration that allowed 100% of the ticket sales to go back to the charity.  The Johnson Township Community Centre in Desbarats was transformed into an "enchanted forest” for the occasion.  Live music was perform by the Ross Phillips Band, followed by a fantastic meal catered by Grand Gardens and entertainment from Sault Ste. Marie's own Tim Murphy, who performed as Joan Rivers.

After dinner, Hugh MacDonald, the vice president of the Kensington Conservancy, introduced the evening with a welcome from the board of directors.  He introduced Tanna Elliott, Executive Director whom has been with the organization since 2006.  Peter Welles, outgoing president likened the gathering to not just look at the tall trees that make up the multi generations whom enjoy the area, but also the families whose deep roots hold it together.  The incoming president, David Hofmann, presented Welles with a gift from all those present and thanked him for his tremendous work over the past 10 years.  Welles, in 2014, was recognized by the Ontario Land Trust Alliance for his international work that has strengthened the movement here in Canada with a visionary award.  President Hofmann hinted at some amazing projects that are currently in the works that will move the conservancy's second ten years in a positive direction.

For further information, about the conservancy, contact the office at  705-782-2200 or by email at tanna.elliott@kensingtonconservancy.org
Photo Gallery